If you cannot find your issue here or in the documentation, please fill an issue on our repository. You can also explore the discussions and do a search on similar issues on the repository.

Unable to see any image or container after downloading Podman Desktop​

The tool connects to Podman using the socket on the host on macOS and on a named pipe on Windows. This is available only on Podman 4.0.2+ So, please check your version and update.

Check at least a Podman machine is running on Windows & macOS:

And check a connection can be made with the CLI

Despite having Podman Engine installed, you may receive an error as follows - Error: No such keg: /usr/local/Cellar/podman or any similar error denoting that Podman Engine does not exist.

To check where exactly is your Podman Engine installed, run the command-

This returns the path where the Podman Engine would be installed. This would help determine further action.

Here, you would replace path-where-podman-exists with the output of which podman.

You can now proceed for a fresh installation of Podman Desktop

In this scenario, the screen may be displaying "No Containers" as shown below despite active containers runnning in the background. 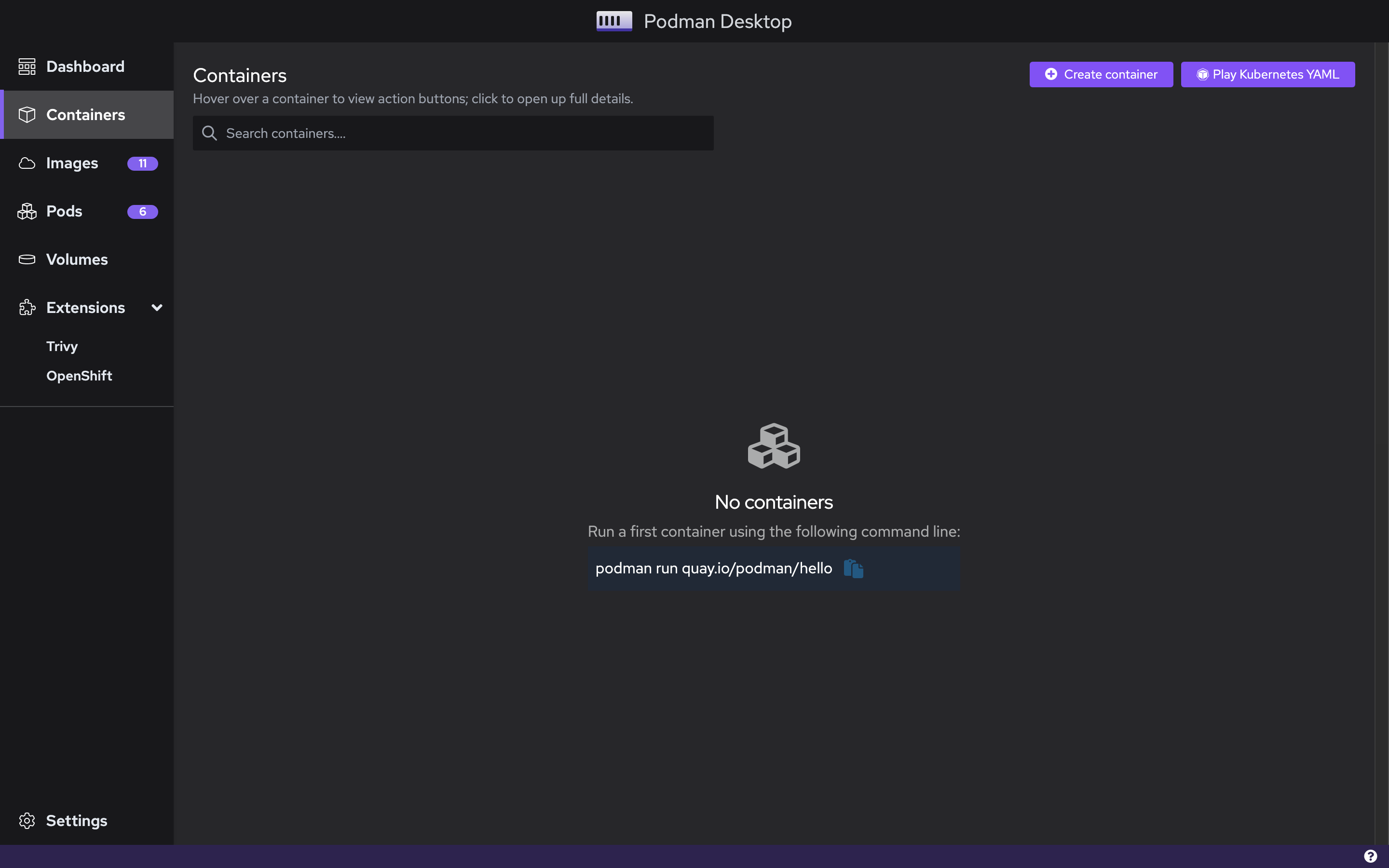 There are three ways to work this out.

After this, you can start off again by initializing a new Podman Machine and loading up the containers.

Unable to set custom binary path for Podman on macOS​

NOTE: A pre-built binary will be added to the Podman release page so you do not have to build podman-mac-helper. An issue is open for this.

When running the Podman provider, a warning shows regarding Docker compatibility mode on the dashboard:

This may appear when either:

Note: If Docker Desktop is started again, it will automatically re-alias the default Docker socket location and the Podman compatibilty warning will re-appear.

If at all you are not able to stop your Podman Machine, you will find such an error in the Logs- Error: Error stopping sysd: exit status 1

It is highly unlikely that you may be stuck in such a situation but if you are, here's a quick fix for it.

Assuming the name of the Podman Machine to be my-machine, run the following commands in the terminal:

This shall display a list of active distributions i.e. my-machine in this case.

This will stop the Podman Machine for you.

If you are using an Apple Silicon and brew, you might encounter the following error when starting Podman from Podman Desktop

Podman machine is running as a x86_64 process and it could be due to a dual install of homebrew: one for x86_64 and one for arm64.

Finally clean the poddman machine VMs that had been previously created, a create new ones.

You should be a happy camper from here.